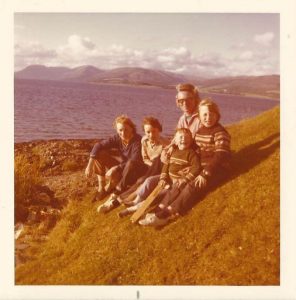 Rothesay: so much to answer for.

Less than a fortnight before my 50th birthday, my first book of poems – The Bright Tethers – has been published. About time? Well, I’ve only been writing the stuff since I was 12 (the first real one was written in Rothesay on the Isle of Bute, during either the October break in the winter of 78 or the Easter one of 79 – I’ve still got some detective work to do before I know definitively … I’ll keep you posted).

When I was a 20-year-old student at the University of Aberdeen, a local publisher who’d read me in the magazine ‘Scratchings’ asked if he could bring out a small book of my poems. Iain Crichton Smith, who was the University’s writer-in-residence and my favourite living Scottish poet, agreed to contribute the book’s introduction. But I pulled out of the project – I’d just written a couple of poems that I thought better than all my previous ones, and wanted to continue in that vein till I had enough for a book. Those were the days. The word ‘precious’ comes to mind, but I was in earnest. Later I had an offer of publication, but was told I would have to wait three years. Three years! No chance would I agree to that. And this was almost a quarter of a century ago.

Would my poems have turned out differently if that first book, and subsequent slim volumes, had appeared? I think so. I think I would have been a bit too aware of having an audience – would have become more guarded. So, my absence from the scene has been a blessing in (heavy) disguise. I almost fell prey to a different danger – of drifting into incoherence. Just when I was starting to write prose poems of utter obscurity I began corresponding with the two living poets whose work I liked best: Robert Nye and Seán Haldane. I thought I’d better shape and sharpen up. And so my poems began to make sense again.

I’m honoured that Seán, having (for a second time in his life) turned poetry publisher, offered to include my work in Rún Press’s ‘Pocket Poems’ series of books, especially since the other poets in the series are the late Martin Seymour-Smith (whose book I edited) and Valentin Iremonger. The style of the books is innovative and attractive. And they genuinely do fit into an average-sized coat pocket. As any poet’s lifetime of work ought to do.