Four decades of poem-writing have gone into the making of The Bright Tethers. This is the best of Cameron, whose achievement is steadily gaining recognition (his poem ‘Night Singing’ is read in Irish schools; in 2014 he received the Hennessy Literary Award for Poetry).

David writes only about what springs at the throat. His themes may be the big ones of love and death, but the details are those of ordinary life. The earliest influences have been the deepest: Donne, Blake and Hardy; Edward Thomas, the early Eliot, Rosenberg, Graves and Riding.

Some of the book’s poems were published in periodicals and anthologies, but mostly they have circulated among fellow poets. One of these, Seamus Heaney, has written appreciatively of the poetry’s ‘strangeness and credibility’.

“It was the involuntary, electrifying experience of writing those first poems that stayed with me as guide. It’s the unlooked-for poem that I trust.”
from Author’s Note

In the month of May,
In the depths of my old school,
The corridors were lined
With acquiescent girls –
Some in chapel veils –
As well as the odd boy.
Along the stringed beads
The nimble fingers moved,
The nimble fingers which
I daily ached to touch.

In that hour before the bell,
I was possessed by all
The murmuring and clacking,
The concentrated air
Of girls – some of them veiled! –
Caught up in adoration.
And though, in truth, I could
Have done with the extra sleep,
The thick stupor of prayer
Only strengthened my desire

For one among them there.

1
The man in the good crombie coat
Is an impostor. Remember,
He is not your father. The coat’s
Your father’s. Just that. Remember.

2
Why is this house the wrong way round,
And why is it round the wrong way?
In the magnified garden say
Who’s afraid of a dog daisy.

3
The milk-white music box has stopped.
The beehive woman on the couch
Smiles as I take a cigarette.
I get to touch each moulded pouch.

4
I do not know which way to turn
The key; if I should come or go.
Is this the door that’s just for show?
The lock’s in shadow.

It’s ages ago now
I won a prize unfairly
In Mrs Robinson’s living room.
Looking back, I see
Mrs Robinson knew
Fine well what I was doing –
Wrinkling my nose to twitch
The blindfold up a bit.
I pinned that donkey’s tail
A little too precisely,
Mrs Robinson, didn’t I?

God knows why it’s back again,
That lost illicit love
Of victory and liquorice
At any cost, my shame
Lifting the blindfold a little
In Mrs Robinson’s living room.

When I lie down it will be bright enough
To make out shapes of bookshelves and their books
And dark to see the light displays of cars.
Now memory makes a vivid last appeal:
My father swatting midges from my hood,
Diminished to a tool-box after death;
A party where I pulled out all the stops
And pouting girls looked largely unconvinced;
Those mushroom-gatherers on that gleaming hill.
I root around for meaning in this heap
(The neighbours call a muffled word or two):
Ready or not, sleep’s ambush comes like age,
Obliterating what’s not understood,
Or so it seems tonight. Others may lie
And claim they saw it all or had it whole.

I looked for God. I found a barber’s pole.

I know the secret of the door
Dividing after from before.
I know who waits there, with black band
To make the children understand.

You know it too. You used to do.
You used to fold my hands in two
And clasp them tight. I pray you find
Him hidden, waiting to be kind.

It’s no life, not for you. I see that now.
Forgive me, love. And when you’re done forgiving,
Forgive me still. A child who beat her brow
Against her wall at night knows well reliving
Terror is no life. Not for you. For me,
My part, I thought to take you in my arms,
Take you bodily somewhere you would be,
As the hymnist says, safe from all alarms –
A quiet summerhouse, some dear green place
Where the dragonfly whirrs uneven wings –
Would smooth away the terror from your face,
The terror I utterly can’t bear. These things
You’ve seen I would not wish on any daughter.
Forgive me. I forgot how young you were.

There comes a time in singing to a child,
As the small limbs go limp and the breaths deepen,
That you become aware of weight. It’s then
You hear your voice, and in it something wild.
Why do fears come? Nothing on any shelf
Can tell you in this place of simple rhyme.
The child’s asleep, and has been for some time.
You’re only singing now to soothe yourself.

‘Fortuitous,’ hissed the landlady.
One double left, so late at night:
Where was the fortune there? For me
It was in you, in your eyes bright
With youth, and longing. We had spent
The day in that sun-gilded town,
Following where the river went
– To this hall-hovering, snooty frown.

We were new lovers, wandering
The world and unafraid of all
Landladies with their laundering,
Their fake-gilt frames upon the wall.
We saw instantly through the fuss
A bed made for the two of us.


David Cameron’s The Bright Tethers confirms him as one of the most insightful and thought-provoking poets around.Ron Butlin, Sunday Herald Books of the Year (2016)

Thoughtful, tentative, musical, human in scale: these are poems which deserve to last.D.A. Prince, London Grip

Here is a man blessed with being nourished by the familial, from which poems arise as part of his nature – sensitive, private, profound, and connected … Just as a strong show of paintings makes us see everything through the artist’s eyes for a while afterwards, so this collection compels us to witness our own lives as a series of poems, spoken silently in this poet’s voice.Marnie Pomeroy

David Cameron is not your usual, institutionalised poet. He’s made his way in the real world and written his poems on the side of his everyday life. The people that populate Cameron’s poems are often strangers, and there are some good lines on the absences that haunt all our lives. Cameron also demonstrates a sophisticated use of rhyme, a technique many poets, oddly, have forgotten about.Nick Major, The Herald 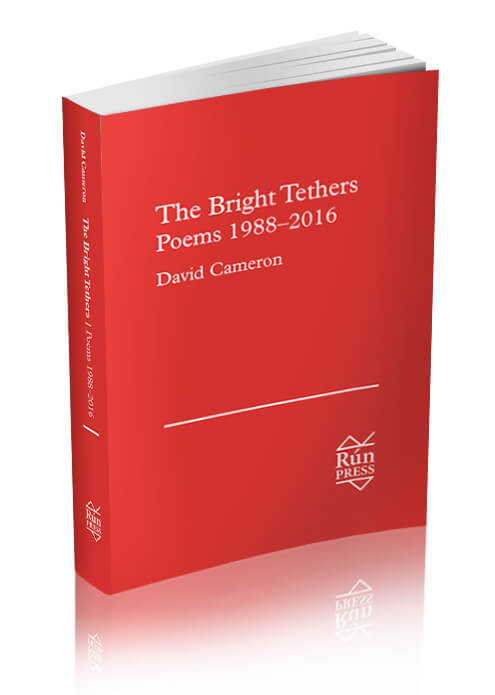 Buy The Bright Tethers directly from the publisher (recommended)