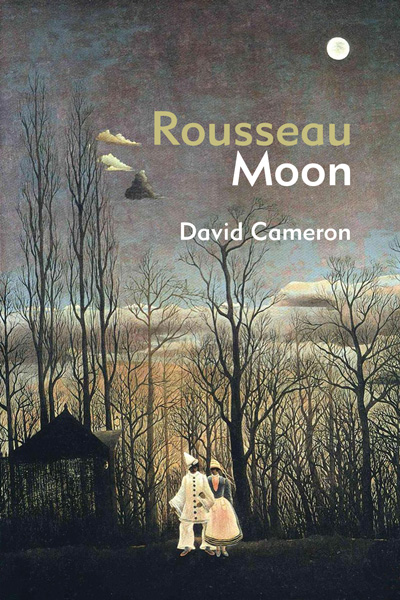 Buy the ebook Rousseau Moon from
Amazon (UK). Contact the author if you would like one of the few remaining paperbacks.

Rousseau Moon, David’s debut collection, consists of a novella and 14 short stories. It was critically accaimed on publication in 2000, was longlisted for the Saltire Scottish Book of the Year Award, and was chosen by Robert Nye as one of his Books of the Year in The Scotsman. It has recently been republished as an ebook.

The title novella tells the story of teenage rebellion in the Scottish new town of East Kilbride, as the narrator struggles to come to terms with the memory – or, rather, lack of memories – of his dead father (the novella is ‘three-quarters autobiographical’, David has said). Its lyricism prompted one reviewer to describe it as ‘a revelation that everything is magical if you look at it hard enough, and find the right words for it.’

The book’s stories were well described on publication as ‘pictures of contemporary life and primitive longing’.

“This Scottish poet’s first collection of fiction is superb … Often there is a sense of loss, but always there is the pleasure of recollection and the sheer joy at seeing a writer pinpoint those times which all of us have had, and which make us what we are.”
Simon Linnell, The Tablet

“Rousseau Moon strikes me as the most interesting and promising debut for many years.”
Robert Nye, The Scotsman (Books of the Year, 2000)

“A bold and, ultimately, triumphant, selection. With this first volume Cameron successfully plants a flag in the ground which says ‘Watch This Space’.”
Brian Hennigan, Caledonia

“A perceptive, haunting collection – well worth tracking down.”
Timeout