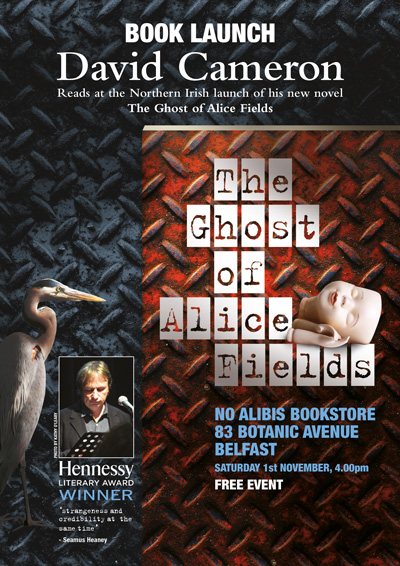 The poster for the book’s Belfast launch in 2014.

The Ghost of Alice Fields

The Ghost of Alice Fields puts a poetic slant on the crime novel. Alice Fields, the adopted daughter of a Balkans scholar, is killed precisely a decade after Serbia’s President gave a notorious speech which heralded the Yugoslav Wars of the 1990s. In Edinburgh, the poet and newspaper columnist Jude Oswald chances upon a crime scene reconstruction, and uses his column to make an accusation that sends his already troubled life into freefall.

The unusual poetry-crime link was suggested to David by his own youthful enthusiasm for the detective fiction of Agatha Christie and Arthur Conan Doyle, which was replaced in his teens by a passion for poetry. ‘I suddenly realised that there wasn’t a complete disconnect there. In writing poems I was doggedly pursuing unconscious clues in the search for meaning.’

As well as Edinburgh, a principal setting of the novel is the Fife village of North Queensferry, where David once lived. He revisits in imagination the Signal Station cottages under the Forth Rail Bridge – the cottages were used originally by engineers working on the construction of the bridge before the Royal Navy started using the location as a base.

“Here was the real glory above his head. The celebrated – but how, exactly? – Forth Bridge, the rail bridge, darkly, rustily red, spanning the night sky and the tidal estuary, never quite humbled by the scaffolding applied to it like useless acupuncture needles to a heroically ravaged face. It faced him like the prow of a magnificent ship. Queen Mary regarding him in the dark. And, for once, not finding him wanting.”

The Balkan theme is informed by David’s experience as the co-editor of a book of essays on the Balkans, and also as an official reporter on a Balkans conference in the Peace Palace of the Hague.

This isn’t crime-writing-by-numbers. As David remarked on the book’s publication, his aim was ‘for there to be just as much suspense as there is in life, and no more unexpected twists than life might realistically throw up’.

Click play below to listen to David reading an extract.